At the 34th IACC-Americas conference in Fort Lauderdale, Florida, IACC recognised a number of individuals their volunteerism, dedication and commitment to bettering the association and industry. 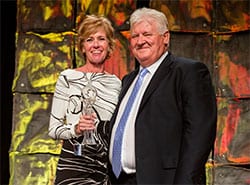 IACC presented the Global Distinguished Service Award to Leslie Vanderzwet of Alberta Canada. Peter Stewart, Global President of IACC (and Operations Director, Macquarie Graduate School of Management, Sydney), awarded IACC’s highest and most prestigious honour given to someone who goes above and beyond at a chapter and global level.

Leslie first became involved in IACC in 1998 and has been active ever since, including serving for a number of years on the Americas chapter conference planning committee. Leslie has co-chaired numerous project teams, customer round table events and has mentored countless members over the years. Leslie has served on both the Americas chapter board and also the Global board.

Peter Stewart commented “It is a privilege as Global President to be able to recognise Leslie’s contributions to the organisation and Leslie is a shining example of why we should value our volunteers, who give us their time, their knowledge and their skills to advance the association. In one year alone, Leslie took no less than 9 international flights to attend meetings and to serve IACC, just one example of her commitment”.

Leslie stepped down from her official board duties in recent months to focus on health issues, but remains in touch with many in IACC and made the trip to the annual conference this year to be with colleagues and friends. 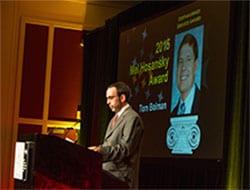 Tom was hired by IACC as the first employee in the role of Executive Director in November, 1986. At this time, IACC was just a small group of like-minded facilities, mostly in the US, struggling to stay alive financially. TJ Fimmano commented “Tom learned and ultimately mastered the idea of the conference center concept. He built relationships, he sold people and organisations on the benefits, he pushed when he had to, pulled when he needed to and he acquiesced when appropriate”.

TJ Fimmano further commented “Once this person retired we were a well-respected 340 member association in 13 countries and financially sound. The list of accomplishments for this individual is so enormous I couldn’t even begin to do it justice. Suffice to say none of us would be here right now if it wasn’t for the all of those accomplishments and the passion with which he achieved them for so many years”.

Tom was unfortunately not able to attend the conference to receive this year’s award due to unforeseen health issues, but wanted to express his sincere gratitude for this great recognition given to him by IACC and commented “I am deeply honored to receive the Hosansky Award and humbled to join the incredibly distinguished list of past recipients.” 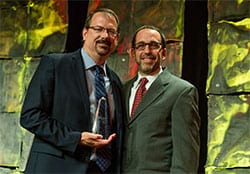 The Pyramid Award was established in 2000 to shine the spotlight on members who show a true and long-lasting commitment to IACC education. Only one individual can receive this award each year, with the 2015 award being presented at the IACC-Americas Annual Conference to Sean Anderson, Vice President of Operations for Sodexo Conferencing.

Sean attended his first IACC conference in 2000 and has attended every IACC-Americas conference in the last 15 years! TJ Fimmano commented “Sean’s passion for the industry and the association is widely acknowledged and respected in the IACC family both domestically and globally”.

Sean currently sits on both the IACC Americas and Global boards; is Vice President for the IACC-Americas chapter. In addition Sean and has served as chair for two member committees including the leadership development committee; served on the marketing committee for 5+ years; Co-chaired IACC’s electronic initiatives group and participated for 3 years on the website subcommittee. Furthermore, he has been at the heart of many educational initiatives, including the education & learning network liaison and was actively involved in IACC’s rebranding campaign.

In 2013 Sean was awarded IACC’s Award of Excellence. 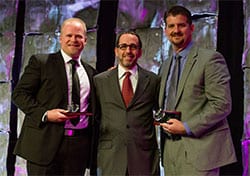 The Award of Excellence was established 12 years ago by the IACC Americas’ Board of Directors to underscore our commitment to education and to give heightened recognition and visibility to those individuals who give of their time, talent and resources to expand and enhance IACC’s educational offerings.

TJ Fimmano, IACC-Americas President commented, “The two winners of this year’s Award of Excellence are individuals who have been involved in IACC education at multiple levels and have made significant contributions to IACC education. We would usually announce each winner in turn, but this year, these two come as a ‘true package'”.

Ken and Jason have attended the annual conference for 10 and 8 years respectively, and have served on the ACPC for a combined total of 13 years. They have served on committees including Production, Copper Skillet, Technology and Education.

TJ further commented “under their stewardship, the Annual Conference has developed in a number of important ways and continues to evolve and provide the learning needed for IACC’s members”.