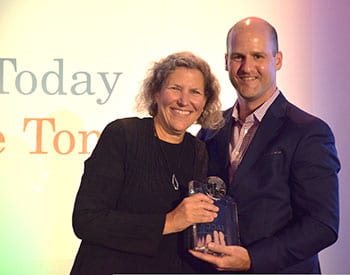 Louise Silberman, CEO of Summit Chicago, was presented with the IACC Global Distinguished Service Award at the IACC European Knowledge Festival in Lisbon.

Alex Cabanas, IACC’s president recognised the many achievements and impact Louise has had on the association and members around the world, over a number of years and conveyed what an honour it was to highlight just some of these at the awards dinner in Lisbon.

Louise was a member of the America’s board for a number of years and led the very successful study tours which introduced many of the today’s leaders to IACC in the first place.

Peter Stewart, past global president commented “her passion for the “internationals” was amazing and very infectious!”.

Louise has supported global internships by hosting interns and sending her staff as interns to other countries. And she has visited every chapter of IACC, actively participating in IACC conferences in France, UK, Sweden, Denmark, Australia and Canada as well as the US and now Portugal.

Mark Cooper, IACC’s CEO further commented “Louise was the first American IACC member I met on my very first pre-conference study tour in and around New York. That whole experience prepared me perfectly for the conference that followed and the friends I made during Louise’s study tour remain close friends today, nearly 20 years later”.

Louise commented : “I am honored and humbled to have received IACC’s Global Distinguished Award. I have had the privilege of meeting and working with the most amazing people from all over the world.  IACC truly is a global organization, and in some small way, I feel I contributed to that success”.