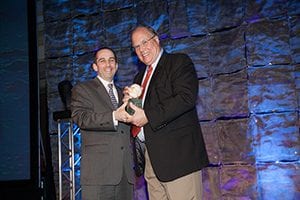 “I am honoured and thrilled to receive this award” said Stockmann, “especially knowing the list of past recipients who have made such an impact on our association and our industry. My experience – particularly 12 years on the education programmes – has been rewarding and exciting. I encourage each of you to get involved; this is a very exciting time to be active in IACC.”

He travels in the name of IACC also took him to Mexico, where he helped launch our first Central American member, ultimately creating the foundation for what today is the Americas Chapter as we know it.

Beyond all the travel and lofty titles, Pete’s passion for education drove him to be an active member in the SPIN and OPIN network for over a decade – ensuring IACC properties of all sizes would benefit from broad-based education to help grow our industry – and in the process build a stronger network of engaged members. This passion earned him IACC’s highest education award – the Pyramid Award.

Since 1985, IACC acknowledges one individual each year who has given tremendous service to IACC and the conference centre industry. Originally called the Distinguished Service Award, this honour was renamed in 1990 in memory of its first recipient, Mel Hosansky. Long-time editor of Meetings & Conventions Magazine and, later, Successful Meetings, Hosansky was an early supporter of IACC and its objectives.

IACC would like to recognise the past recipients of the Mel Hosansky Award for Distinguished Service. They are, in order of receipt: